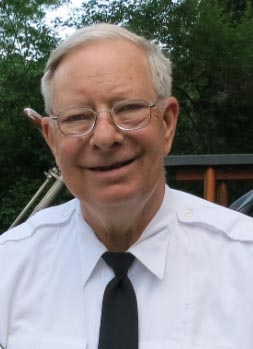 Laurance A. Luder, age 71, of Media, PA, formerly of Swarthmore, died on Friday, August 2,  2019.  Larry was born on June 20, 1948 in Philadelphia, PA to Arnold Luder and Lenore Blundin Luder.  A 1966 graduate of Swarthmore High School, he spent the majority of his career with Wyeth Pharmaceuticals and was the Manager of Facility Safety at the time of his retirement.  At Wyeth he met his wife Mary.  They would have celebrated 43 years of marriage on August 7.

Larry was a 3rdgeneration Swarthmorean where he lived until 2016.  Passionate about serving his community, he joined the Swarthmore Fire and Protective Association at the age of 19. Larry held the ranks of Firefighter, Engineer, Chief Engineer, Safety Officer, Treasurer and most notably President for 37 years.  He often mentored new members, hosted children’s birthday parties at the firehouse, guided restoration of two antique fire trucks and was the founding President of the Swarthmore Fire and Protective Historical Association.  He was a member and president of the ASSE (American Society of Safety Engineers) and NFPA (National Fire and Protection Association) as well as a Certified Fire Protection Specialist.  He received the Swarthmore Rotary Community Service Award in 1996 and the Swarthmore Citizen of the Year Award in 2011. Larry worked the North gate at Rough and Tumble for many years, he stamped hands, gave out programs and was very helpful in assisting our guests.

Larry loved traveling, trains and home improvement projects. He was an avid fan of Strath Haven football and the marching band.  He was a long time member of Holy Trinity Lutheran Church in Wallingford and recently of Advent Lutheran Church in West Chester.  He was thrilled to become a grandfather in January.  The family wishes to extend their gratitude to Pastor Chris Franz and the Lima Estates Skilled Nursing and Hospice staff for the loving care they gave to Larry.
Survivors:
Wife: Mary Wurster Luder
Daughter: Laura (Art) Kalemkarian
Granddaughter: Hope Kalemkarian
Brother: Richard Luder
Sister-in-law and brother-in-law Marty and Nancy Knorr, two nieces, and cousins Janet Redding and Bonnie Redding.