Photos of the project are available here. 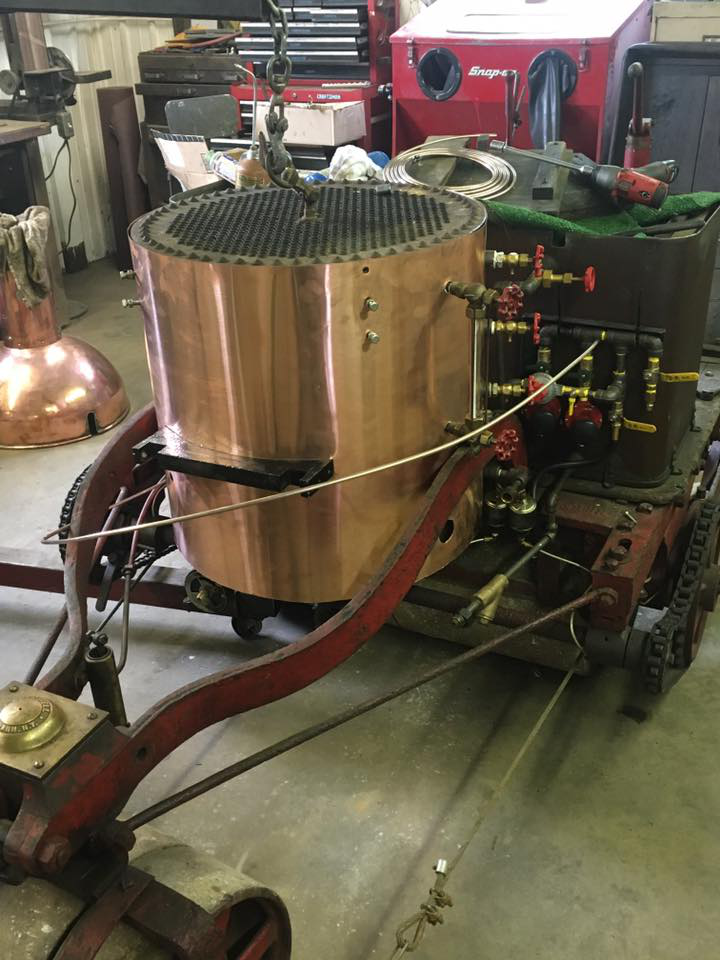 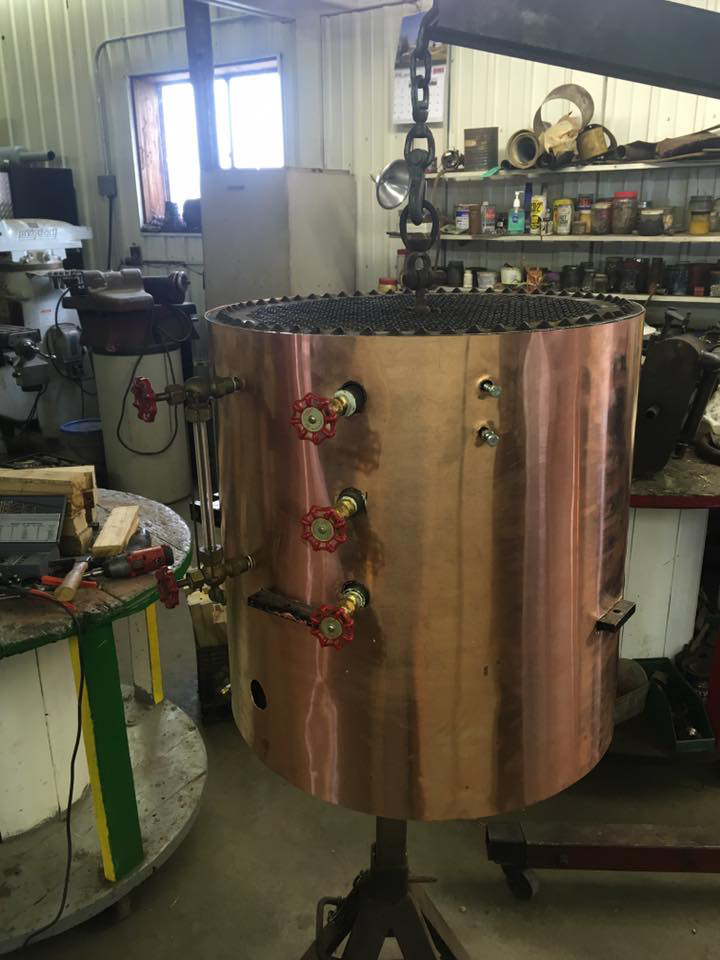 The drive chain if FINALLY done. Many thanks to Butch & Andrea Biesecker for cutting out the links and re engineering the mower drive. Also a big thank you to Tom Cochrane for making a new rod for the water pump.

Another Saturday done and more progress on the mower. Thanks to Frank Rowe for his pipe fitting prowess, we're almost there. We have one more hurdle, getting water into the boiler. 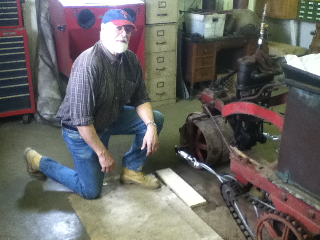 The seat has been repaired, The cushion has been made removable to access the new water tank fill. The springs were reused and the canvas was dyed to match the original. No modifications were made to the wood frame other than wood dowels to hold it together. I still have to make wood blocks to locate it on the tank after we see where all the machinery falls. The lift arm, caster & wheel patterns have been prepped and are at Cattail, 1 month backlog right now. The top of the water tank has been cut out (Thank you Kelley! ) only to find a bunch of baffles and a petrified mouse. I think we can get the baffles out with out killing the integrity of the tank and preserve them for reinstallation at a later date. Hoping to address that Saturday.

New water tank is on site. Sight glass valves have been freed, cleaned and tapped for hidden internal supply lines, ready for new packing, glass and mock up to new tank.(Thank you John!) Jack shaft, clutches and adjusters/ steering cable pulley's are free and ready to go(Thank you Tracy and Frank!) Mower was completely disassembled, adjusters freed and greased, ready for grass. ( Thank you Frank, that was rather ugly!) Butch and Dave Jr pulled and tested the boiler, that's at Butches. (Thanks Dave & Butch!) The brake has been freed and reinstalled, I have the material for new metal bands, trying to decide what to use for lining (belting?). Propane regulator should be here by Saturday. Chains are still an issue, more measurements hopefully Saturday and order on Monday. Steering cable & burner next hurdles........some pictures attached and a new shop dog...... "Maya". All complaints and criticism should be sent to...................................Butch ;-)

10/3  It runs!  Tracy Merges, Frank Rowe & Kelley Peffley had it spinning on shop air today. It's still a little tight, & there seems to be a timing or valve issue in reverse. The jack shaft & jack bolts are free & re-installed. These guys did a great job today! Below is the video of the engine actually running!    Jim

9/5/15  The steam mower is in the shop, the shop is CLEAN! Mike Pershinsky brought it down along with a box of miscellaneous parts. Mike, along with Tracy Merges, Jim Douthart, and Amos Lantz cleaned the shop from top to bottom.

Did a short exam of the mower, at least one piece to be recast that raises the blade, more research  will be necessary. We thought the engine should be accessed and freed up first. Once we get past that, the rest should be fairly easy. The wood isn't beyond repair. Paint & copper polish should bring it around nicely. Many great thanks to the volunteers, they did a hell of a job today, nobody went home clean or dry.

Rough and Tumble is looking for Volunteers to work on our rare 1901 Steam Lawn Mower and have it restored and operational for our 2016 show.  If you are interested, please contact our volunteer coordinator regarding this project. 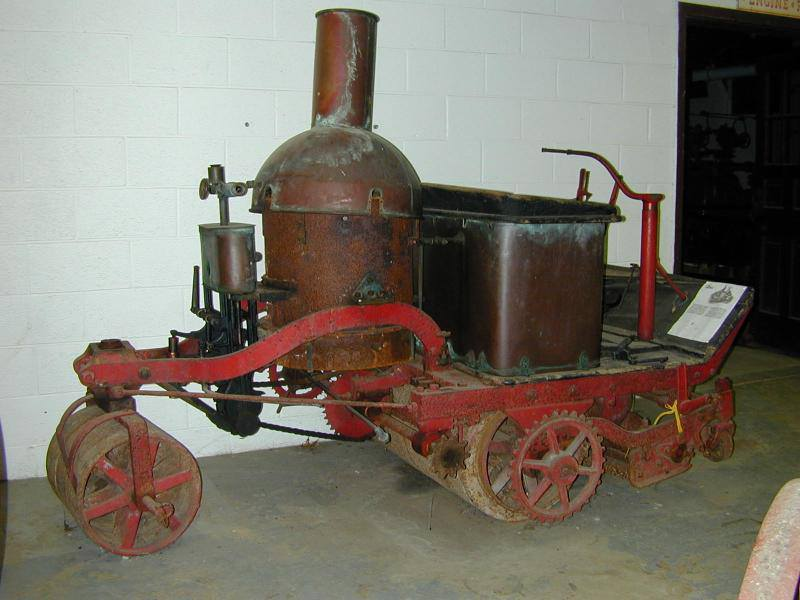 Engine and boiler are mounted between steel arched frames which also carry a copper twin tank for water and fuel, with the driver's seat on top. Roller chains (missing in this picture) drive a jackshaft and separate drives go to the mowing reel and the large under-roll; a small outrigger roll is provided at the engine end of the frame. Forward movement is to the right of the picture. Steering is by tiller in this version. The steam engine has a copper steam-jacket, and ball-bearing big-ends, and is of steam automobile style. The mowing reel cuts a 40" swath. At one time Coldwell steam mowers were in use on the White House lawns.

Steam is supplied from a 20-inch boiler of the fire-tube type, which has 24 feet of feed-water heating coils in the dome, and  contains 668 fire tubes in its main portion. Directly behind it is a 2-cylinder Mason engine of 3 X 4 inch bore and stroke. The engine is connected with a sprocket on the countershaft by means of a heavy chain; sprocket can be unlocked from the shaft by throwing out a positive clutch if it is desired to run the engine alone for any purpose. The counter shaft drives the main roller by a sprocket and chain, and the lawn mower by means of chains on each side. The roller is fitted with 2 hand brakes one on each side, which are applied by a heed pedal. It carries 60 gallons of water and 10 gallons of gasoline, the tanks being respectively beneath the seat and the floor board. The water is sufficient to last for an 8-hour run on good ground, while the gasoline consumption for that length of time is about 15 gallons. 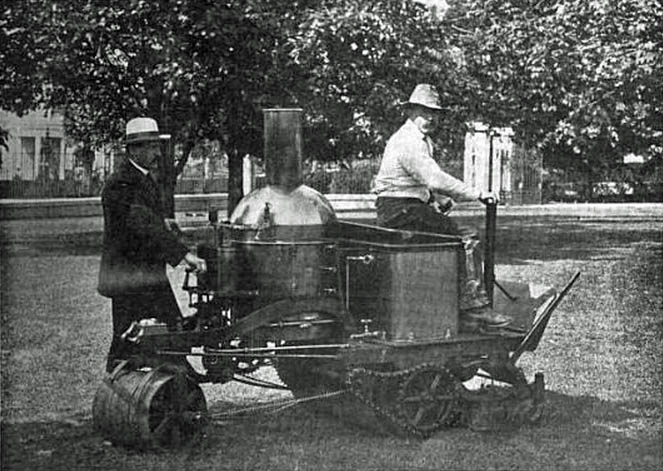 The boiler is fitted with a regular tube burner and a fuel regulator; an automatic air pump for maintaining the pressure in the gasoline tank is geared to the engine. The working pressure employed is I80 pounds per square inch, and the speed of which the machine is capable is 4 miles per hour. It may be used as a roller by raising the grass cutter by means of the lever shown at one side; it can run backward or forward; a 900 X 450 foot polo field can be cut and rolled in 8 hours. The machine can be used for other purposes . . . threshing grain, sawing wood, and spraying trees.

Some more History. For a number of years Mr. Swift had a monopoly of the lawn mower manufacturing trade in the U.S. but this ended in the late 1860s-early 1870s when two of his employees George L. Chadborn and Thomas Coldwell bought Swift’s stock and goodwill and went on work on their own and formed the firm of Chadborn, Coldwell & Company, which began operations in Newburgh producing the Excelsior Roller Mower.

It has been estimated that at this time there were only about three hundred American-made machines, plus a few imported English machines, in the country at that time. By 1891 the Chadborn & Coldwell Manufacturing Company of Newburgh was producing twenty thousand machines annually, and was in the process of expanding to be able to produce thirty thousand.

In the same year Thomas Coldwell withdrew and formed the Coldwell Lawn Mower Company of Newburgh, and planned a new factory which could produce from 150 to 200 mowers each day. The business established by Thomas Coldwell was continued after his death in 1905 by his two sons.. William H. and Harry T. and it remained in business for into the 1940s. Over the years it was merged into various other manufacturing companies and ultimately became part of the current Toro Company of Minneapolis, MN.